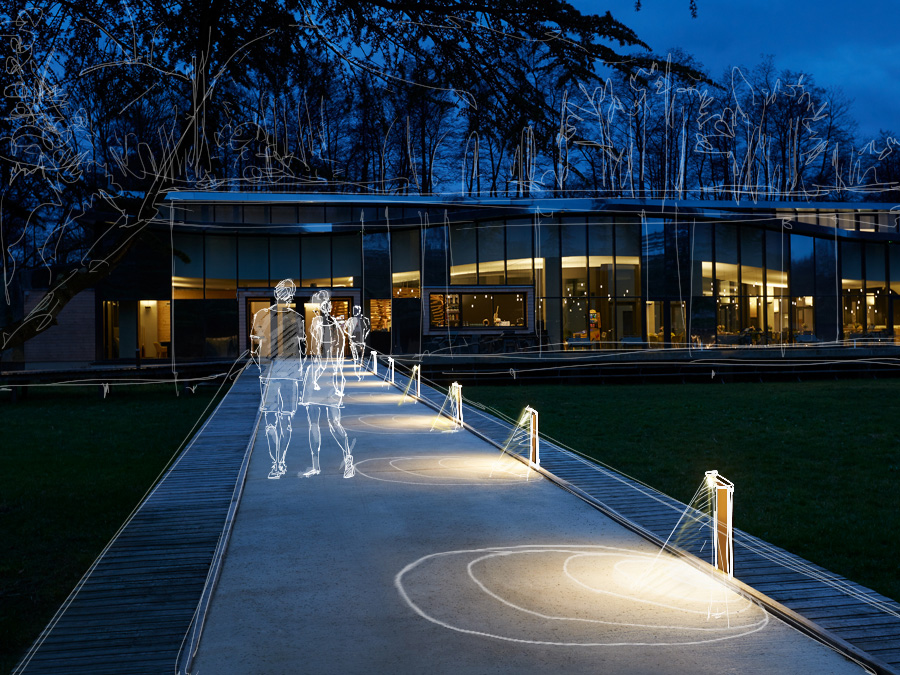 In the first article on outdoor passageways, we were inspired by the lighting effects that guide us to our front door, through a built-up area or near water, and we saw the different shapes that light takes when projected onto the ground from a recessed fixture, step light or bollard.

Here, we take a closer look at the different types of LED fixtures used to light pathways, their emotional qualities and their installation characteristics.

The dynamism of a graphic line

We want to dedicate a separate section to the expressive potential of diffuse-light linear profiles in lighting outdoor passageways. The words of Wassily Kandinsky express the dynamic essence that constitutes the line and its origin.

“The geometric line is an invisible thing. It is the track made by the moving point; that is, its product.
It is created by movement – specifically through the destruction of the intense self-contained repose of the point. Here, the leap out of the static to the dynamic occurs.”

The images below illustrate the different purposes of the line when applied to lighting.

In order of appearance:

🔶 we’re on the ramped approach to a company: with a bold vertical gesture, the linear profile connects visitors with the entrance – the continuous line guides us securely and implies a confidence that leaves no room for second thoughts;

🔶 another entrance, this time we are indoors, in a commercial setting: lines serve as signposting to invite the customer to climb the stairs and discover the upper floor. Their staggered placement is suggestive of a person’s steps or the lane markings on a road;

🔶 are the horizontal segments blocking our way? Yes, probably, and we are grateful to them for doing so because, instead of moving briskly along the path, we were encouraged to look up and enjoy the wonderful panorama on the horizon;

🔶 the diagonal, the longest line: its oblique attitude is both figurative and symbolic because it links two distinct architectural elements, the facade and the pavement before it, creating connections of light and continuity with the building’s design.

The shape is the same, but the light content is very different.

These lines house more complex optical bodies than those seen above: they’re the outdoor linear profiles with optics that act as step lights – recessed into the stone walls at 30 cm from the ground, they line the pathway projecting a grazing light.

In our story of pedestrian paths, we must make room for an all-Italian project that focuses on the outdoor footpaths that enable visitors to explore the hillside estate known as the Vittoriale degli Italiani, erected by Gabriele d’Annunzio in Gardone Riviera, Brescia.

In 2017, MI10studio concentrated its lighting design on the walk that leads from the Prioria (priory), d’Annunzio’s home and museum, to the MAS (Museo d’Annunzio Segreto, a museum filled with d’Annunzio’s hitherto unseen personal effects) and the Puglia cruiser, an evocative relic from the Great War.

The profile has elliptical optics that, by dint of their being installed just above the ground, create a wall-grazing effect on the passageway.

Pasito a pasito, step by step

We can’t talk about walkways without taking a closer look at Pasito. It is one of the most popular solutions with lighting designers and customers looking for a uniform effect without alternating light and shade. Let’s see why.

We introduced the fixture in the previous instalment, in an example where we described how this step light provides an excellent luminous flux on the ground (390 lm). However, its distinctive feature is the width of its asymmetric 150°x90° optics.

These mean the fixtures can be positioned five metres apart, reducing the number of step lights needed to guarantee light uniformity on long pathways.

The width of its optics led to a creative use of Pasito for indirect lighting in a covered passage, where they create on the vaulted ceiling the same effect used for the walkway.

The geometry of bollards

Around 1 lux. This is the minimum illuminance on the ground that allows us to see where we’re putting our feet at night if the space is not lit by other sources. Worst case scenario: a moonless night.

Our technical documentation shows the isolux diagrams, whose lines represent the shape of the light projected on the ground.

When is it preferable to choose bollards rather than step lights?

Let’s take another look at some of the requirements already mentioned:

🔶 if the lighting needs to cover a large area: bollards generally have a higher light intensity, and the choice of height affects the projection of light on the ground; additionally, the aesthetic of bollards with a tilted head is better suited to wide-area actions;

🔶 if you don’t have a wall or similar where you can install recessed lights or step lights;

🔶 for decoration. Absolutely, because the visible part, the bollards’ physical presence, changes everything.

In the previous article, we suggested a game: mentally replacing the step lights with bollards in the pictures of the projects. Now we’re inviting you to do the opposite in the following images.

While the light output already enhances the perspective lines, the geometric aesthetics of the chosen bollard emphasise the spatial structure even more. If the bollards are single beam and arranged along the lines of the path in a regular pattern, for instance, there is a clear invitation to the pedestrian not to step outside the lines.

If in-ground fixtures had been used instead of bollards, these spaces would be missing a strongly distinguishing feature.

The lighting reveals a very different approach if the bollards alternate along the path with a double beam. We can see what lies behind the bollards: a grassy sward that probably won’t mind if we walk on it while we wander around, glass in hand, doing a bit of networking in this event location.

We have come to the end of this meander along the paths of outdoor lighting, starting from our own front door and finishing on more triumphal walkways. Inspired by Kandinsky’s words, we’ve re-examined the emotional impact of a few of our LED fixtures’ applications through the pictures collected over the years from case studies. We’ve also spoken of the more technical and installation aspects of the geometries that house the light.

Have you lit a walkway with our fixtures? What are you waiting for … 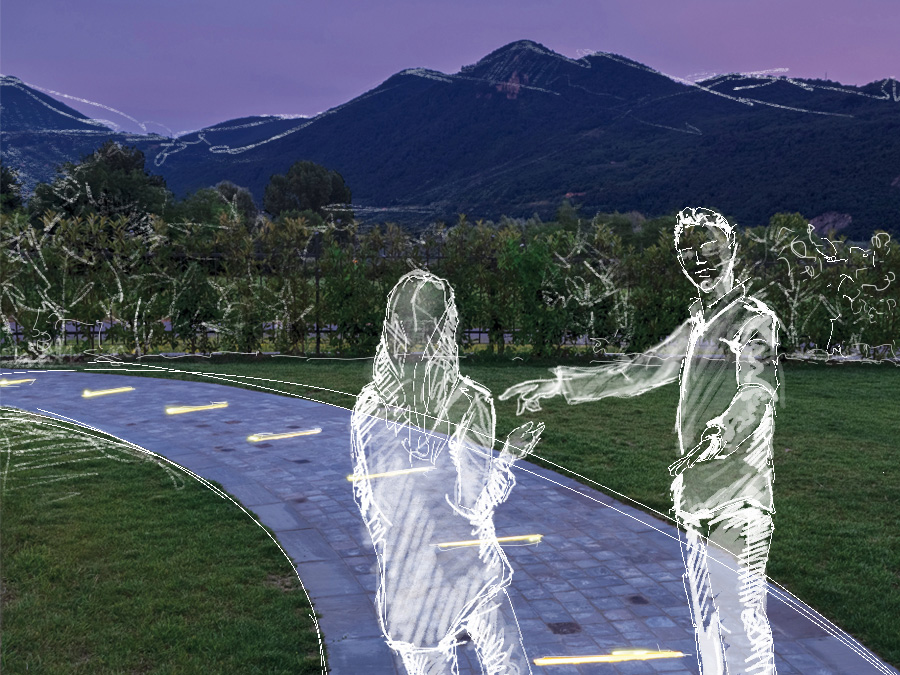 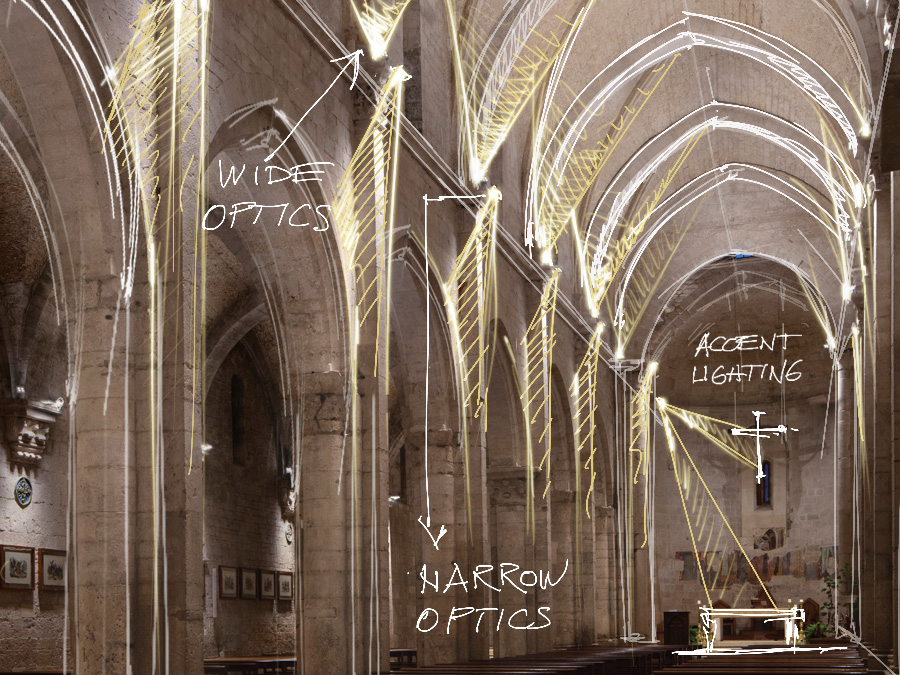